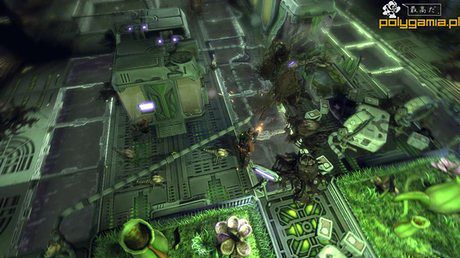 [English version in the right column]

English Version: Can you name the worst and the best features of PSN and Xbox LIVE?

Hmmm... I think both services are very nicely presented, and offer a great range of products. I think the big challenge for people offering digital content though is making it easy for people to find that content. Obviously a shop has lots of wall and floor space to display their content, whereas something like PSN or XBLA only have the screen of the player's TV. This can make it hard for people who might like your game to find it, especially if it's not a featured title and only appears on an alphabetical list somewhere. Both platforms have been pretty imaginative in how they promote titles and bring them to potential customers' attention, but I think that's the challenge for digital distribution... getting everything into the tiny "shop window" of the player's TV screen.

Is digital distribution our future? Do you see any dangers it can bring?

I think people will always want to walk into a shop and purchase a physical item, but the idea of purchasing digitally has gained ground more and more in the last couple of years. You've only got to look at the success of iTunes for how music fans have grown comfortable with the idea of buying individual tracks digitally rather than owning a physical CD. For game developers the move towards digital is a great thing: it means that the costs of developing (without having to manufacture CDs, print manuals etc.) are lower, the potential returns (without retail taking a slice of the money the game makes) are higher, and the loss of income from the second hand market and piracy is removed. This all equates to developers being able to take more of a risk in the titles they develop... games like "Echochrome" and "Eden" maybe wouldn't have had a retail release, so it's great that there's a bunch of thriving digital distribution channels that make it possible for developers to develop them and for people to purchase and enjoy them.

Your thoughts on motion control (wiimote, natal etc). Do you plan to use it in your future products? Or maybe you will stick to classic controllers? I like! I enjoy Wii games, and love the direction that Nintendo have taken their platform: as a way for people to exercise their bodies and minds in a manner that is fun. Games get a bad press in a way that other sedentary activities (such as reading or watching movies) don't, so it's brilliant to see Nintendo addressing that. We do have further plans to work with motion-controllers, but until they're announced, I'm afraid our lips are sealed!

Why did you decide to do a remake of Alien Breed? We've had a lot of email about "Alien Breed" over the last few years. In fact, after "Worms", it's easily the game we hear about most from Team 17 fans. We'd actually been wanting to do an all-new version of the game for a number of years, but despite coming close several times, never managed to get a publisher to buy into the idea. With the success of "Worms" on XBLA and PSN, it became clear to us that we could bring the game to digital platforms ourselves without the need for publisher, so that's what we've done. I think it's fair to say that we're pretty happy with the result.

Do you think that we will see more remakes of old games in the future?

From the Team 17 back-catalogue? Maybe! We've no plans at the moment, but never say never!

Is it better to upgrade and present golden oldies to players who didn't had a chance to play them, or create something new?

Had we just ported the original "Alien Breed", it wouldn't have had high definition visuals and you wouldn't have been able to play it multiplayer over Live: the things that made the game stand out when it was originally released back in the nineties wouldn't have translated into the present. To do the game justice, it really needed re-developing with the strengths of the XBLA platform in mind. As a result, we've done our best to make the game look beautiful, and with online multiplayer and microphone support, it makes the most of Microsoft's Live service. For those players who remember the original game, it's pretty faithful to the feel of the original, so I don't think anyone who's an old fan will be disappointed. What other Amiga games would you like to see on XBLA/PSN?

What about "Project X"? There's one to think about...

Will it be an exact remake of old game, or maybe you will add something new?

Well, gaming's moved on a lot since the Amiga days, and things such as "instant death" or "lives" seem needlessly retro and unforgiving. I think were we to bring back any other games from the Amiga days, we'd look to develop them again from scratch and update the visuals and game mechanics as appropriate.

Can you tell us more about multiplayer? Will you support local coop? For how many players?

It is co-op multiplayer and allows two players to join forces and take on missions designed specifically for multiplayer co-op play. I'd say it's pretty good fun playing the game with someone else... it turns into a bit of a "monster mash" when you play multiplayer, so it's good to have someone watch your back. And yes it works both offline and online, so for players who want to play on the same console without using Live, that works too.

The level structure of the game is linear (i.e. the player completes level one, then level two), but the levels are so large, there's plenty of room for non-linear exploration. There are five levels in single player which translates to about 5-7 hours of gameplay. Finishing the levels in Story Mode unlocks them for Free Play Mode, in which you can replay them with the aim of setting high scores on Live Arcade leader-boards.

Will we see any vehicles in the game?

Not in the first episode no.

Will player characters and weapons be upgradeable?

No, but there's a bunch of weapons to choose from, each useful in different circumstances and against different aliens. The assault rifle for example is useful at keeping aliens at bay, forcing them away from your character, whereas the flamethrower is best deployed at short range against tight-knit groups of aliens. There's not too much ammunition lying about in the levels, so it's all about using the right weapon for the right job, and only using the most powerful weapons when the game calls for it!

Can you explain the idea of 3 games? Will we have one game cut into 3, or 3 separate products?

Each episode is a stand-alone game that can be downloaded and played separately. There's a narrative arc that links the three episodes together, each episode ending on a cliff-hanger that's resolved at the start of the next episode. So if people download the first episode, we hope they'll want to find out how the story carries on in later episodes, but if people want to join the series late, that's ok too... there's a "previously on Alien Breed" sequence at the start of episodes two and three that recaps what's happened so far.

Each episode has a unique selection of weapons, environments and aliens, as well as it's own set-piece battles and boss encounters, so each one has quite a different flavour. They're all pretty tense affairs though. It still makes me nervous playing the game on "Elite" difficulty, and I've been working on the game since the start! Are you happy with the way new Larry turned out? If not - what went wrong? What would you do differently?

"Larry" didn't have the smoothest development, with the acquisition of  Activision be Vivendi resulting in all the staff publisher-side we'd been working with moving on, and the game dropping into limbo for several months while contractual negotiations happened. It's always difficult developing 3rd party titles as time and budget are always tight, but it certainly doesn't help when there are large-scale staff re-organisations happening at the publisher you're working for. But hey, game development's nothing if not unpredictable. I don't think we've anything to prove in our abilities to develop quality software: look at our back-catalogue and our recent releases ("Worms 2: Armageddon" on XBLA, "Worms" on iPhone for example). I hope people will rate "Alien Breed" as highly as there's a lot of love gone into the game.

Do you have anyone from Poland in the team?

Yeah, we've got a couple of Polish guys working here, and one of them did do some of the art for "Alien Breed"... and very talented he is too!